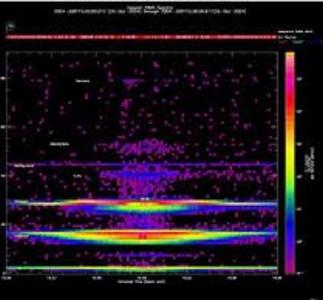 THIS IS CLOUDS OF GAS IN SPACE DETECTED BY SENSORS ON SATELLITES.

As you know, an oil and gas reservoir is a real situation that contains varying amounts of fluid and gas. The fluids in a reservoir are usually oil and water. The gas is usually dry or wet or in-between. Sometimes the fluids are made up of connate water or connate gas. In addition to this the reservoir exists under varying degrees of pressure. The pressure is what makes a commercial reservoir or not. Pressure in the reservoir influences hydrocarbon survey maps. In addition, producing reservoirs are either water drive or a gas drive as to the mechanism that influences the production. All of this results in color variations.

The hydrocarbon reservoir map color-coding is directly influenced by the varying conditions in a reservoir. Percentages of water, oil and gas influence the color-coding at the time that the data is interpreted. This is one reason that interpretation is done at the time of an order. The comparison years are very important in evaluating a prospect. Some prospects are condemned because they don’t remain constant over time. It is interesting to note that we have found old producing fields to be recharged after several years of non-production. This is found by using comparison data. So, to get back to the color-coding, we have found that some reservoirs that mapped red, but had blue pixels mixed in, produced with a water drive. Reservoirs that are red but have some blue and a lot of yellow sometimes produce with a gas drive. Some reservoirs that map with orange and yellow and some blue can produce with a water drive but the oil has connate gas that breaks out when the oil is produced. The orange areas have produced primarily oil in some reservoirs that we have mapped. Some orange-yellow maps have produced oil and gas in some areas that we have surveyed. The yellow areas have produced primarily gas if there is no other color-coding within the reservoir area on the map. The most important thing to keep in mind is that the color-coding indicates a hydrocarbon reservoir in place at a specific location. The color-coding on the map is recording the varying conditions in the reservoir and the reservoir rock.

There is no single tool that is one hundred percent fool proof. We have about an 80% success rate when a reservoir is indicated on one of our maps. We cannot record depth but in an area that has been produced it is possible to make assumptions about formations that have produced in the past that may be where a hydrocarbon signature is coming from. Success is also dependent on drilling techniques and completion techniques. It is also dependent on sample and log interpretation and operator judgement.